This is a site about the best game ever, Five Nights At Freddys

Here you will find awesome things about the FNAF animatronics, maybe even some videos! 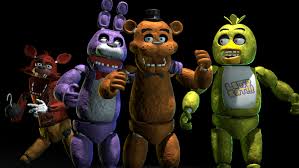 Lets start with the very first game. These are called animatronics and they are featured in FNAF 1, their names are Foxy,Bonnie,Freddy and Chica (in order)

Now, I am going to start with Foxy. When FNAF was first released he was believed to be the cause of the bite of '87. The bite of '87 was when the Freddy Fazbear's Pizza was hosting a dinner then an animatronic went hay-wire and bit of someone's frontal lobe. He was thought to be the killer because Foxy has the sharpest teeth of all also his jaw is broken which could indicate he bit a hard object e.g. a human skull. When Foxy attacks he sprints from pirates cove to your office and if you don't close your door fast enough he will jumpscare you. But if you do close your door fast enough he will bang against your door and drain some of your power.

The bite of '87 was an incident in the Freddy Fazbears Pizza resturaunt in 1987. As I stated it was when an animatronic bit through a skull then bite of the front part of the victom's brain aka the frontal lobe. This incident affected the resturaunt's reputation, which resulted in a major drop in business. However, the restaurant would have closed down either way because of the conditions of the restaurant and the many health violations.

Next animatronic: Bonnie. Bonnie is a purple boy bunny. He fis the guitar player for the singer Freddy, who I am going to get to. Unlike the other animatronics Bonnie has rounded teeth and no eyebrows. When playing the game Bonnie is the first to leave the show stage and appear at you left door in Night 1, luckily through experience it is very easy to get rid of Bonnie in Night 1. Only Bonnie and Foxy appears at your left door, no one else.